Global demand for water continues to increase whilst freshwater sources are becoming more scarce due to increasing demand for natural resources and the impacts of climate change, particularly in semiarid and costal/island areas. Desalination of seawater and brackish water can be used to augment the increasing demand for freshwater supplies. However, desalination is a very energy-intensive process, often using energy supply from fossil fuel sources which are vulnerable to volatile global market prices as well as logistical supply problems in remote and island communities and are therefore not sustainable.

Four desalination systems, powered by Zeming new energy, have finally come into operation under the watchful eye of the President of the Maldives, providing safe and clean drinking water to nearly 2,000 homes on four islands, including Kolamaafushi And bid them farewell to the days when they could only drink the rain.

Until now, the majority of desalination plants have been located in regions with high availability and low costs of energy. Current information on desalination shows that only 1% of total desalinated water is based on energy from renewable sources. Renewables are becoming increasingly mainstream and technology prices continue to decline, thus making renewable energy a viable option. With the increasing demand for desalinated water in energy-importing countries such as India, China and small islands, there is a large market potential for renewable energy-powered desalination systems worldwide.

There are two broad categories of desalination technologies 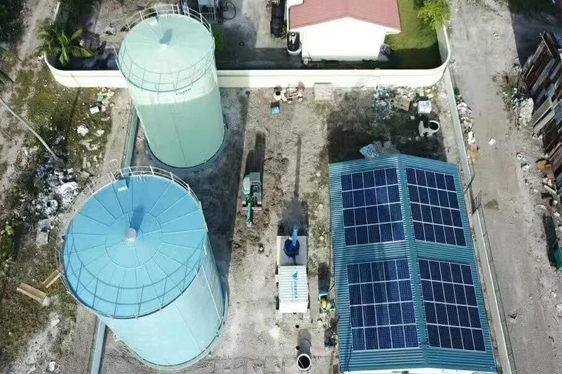 While desalination is still costly, declining renewable energy technology deployment costs are expected to bring this cost down in the coming years. This is of particular interest to remote regions and islands with small populations and poor infrastructure for freshwater and electricity transmission and distribution.

Mapping water needs and renewable energy sources is a strategic tool for planning new desalination systems. Renewable energy-powered desalination could be a key enabler for continued growth,especially in those countries that rely on desalinated water for sustaining local communities and productive uses such as irrigation. As such, renewable energy generation should be seen as a valuable economic investment that reduces external, social, environmental and operational costs. Policymakers may therefore wish to take the evolving market opportunities and long term impacts of technology options into consideration when planning their capacity, infrastructure and sustainable water supply needs.

In view of the load characteristics and local power supply conditions of the seawater and freshwater system, zeming designed a set of hybrid network power supply system. Through the mutual complementation of public diesel power generation system, photovoltaic system, energy storage system and standby diesel power unit, the power supply for seawater desalination system is guaranteed and the stability of system operation is greatly increased. In response to different power cost and power supply continuity requirements, owners can choose a variety of operational strategies to meet their own needs.

Zaiming's Hybrid Grid Solution Features 100 kw PCS, 26 kwp pv power modules and 96 kwh storage batteries for each island. It provides about 120 kw of photovoltaic power in sunny weather and has a storage capacity that allows the system to run for nearly an hour. The local energy management system coordinates the operation mode of each power supply dynamically and reports the data to the centralized management platform.

Next How to Choose a Photovoltaic System?