PID（Potential Induced Degradation）, is meaning as the potential-induced attenuation effect, PV modules’ PID performance is generally refers to those photovoltaic modules which have been under negative bias for a long time in high temperature and high humidity environment, and have surface passivation due to leakage current, that cause the filling factor (FF) , short-circuit current (Isc) and open-circuit voltage (Voc) decrease, and the output power of the module is greatly decreased. As early 21st century, oversea PV module manufacturers found that the actual power generated by PV power plants is far from the theoretical power. After investigation and analysis, the PID theory was put forward. Later, the PID phenomenon on causes and detection methods have been improved after analysis and demonstration of the main research institutions in the world.

Reason for PID: As shown in figure 1, PV module is connected to inverter, and the module which closest to the inverter bears the maximum ground voltage, with a positive UIN / 2 and a negative Uin / 2. 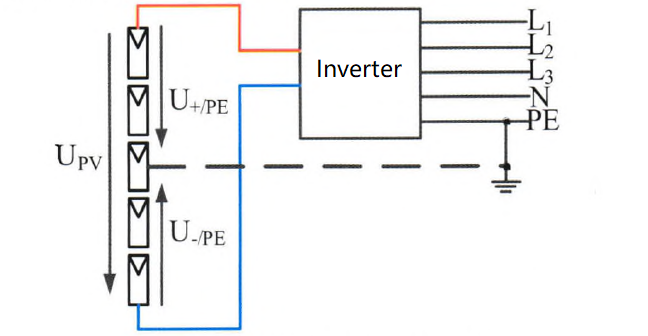 The ion mobility accelerates with humidity, temperature and voltage potential. Tests have revealed the relationship of mobility to temperature and humidity: “Planar contact with the panel surface also causes a capacitive coupling to the cells, resulting in a capacitive leakage current of varying strength.”

1. MATERIAL FACTOR: PID phenomenon is directly related to leakage current between cell and frame, as well as glass and packaging materials used in PV modules. The PID resistance could be effectively improved by improving the process and using materials which are not prone to chemical reaction.

2. System factors: for P type module, PID could be effectively prevent by reducing the negative bias of module battery to metal frame.

Therefore, before design PV system, to grounded the output positive pole of PV module when inverter and system’s hardware allowed (physical grounding or virtual grounding, and the risk of electric shock maybe be happened when people touch the positive pole or negative pole) .

3. Environmental Factors: The PID problem is closely related to the temperature and humidity in the environmental, the size of leakage current and the generation of charged ions have great relation with the number of water molecules in the air. If temperature and humidity in the PV module could be effectively reduced, the module’s performance will be effectively improved.