Photovoltaic power generation (pv) is a technology that directly converts light energy into electricity by using the photovoltaic volt-generating effect of semiconductor interface. It is mainly composed of solar panel (module), controller and inverter, and the main components are composed of electronic components. Solar cells can be packaged and protected in series to form solar cell modules with a large area, which can be combined with power controller and other components to form photovoltaic power generation device.

The main principle of photovoltaic power generation is the photoelectric effect of semiconductors. When a photon hits the metal, its energy can be absorbed by one of the electrons in the metal. The energy absorbed by the electrons is large enough to overcome the internal attraction of the metal to do work and escape from the metal surface to become photoelectrons. An atom of silicon has four outer electrons. If an atom with five outer electrons, such as a phosphorus atom, is added to pure silicon, it becomes an n-type semiconductor. A p-type semiconductor is formed when pure silicon is mixed with atoms with three outer electrons, such as boron atoms. When the p-type and n-type are combined, the contact surface forms a potential difference, which becomes a solar cell. When the sunlight hits the p-n junction, the hole moves from the p-pole region to the n-pole region, and the electrons move from the n-pole region to the p-pole region, forming a current. 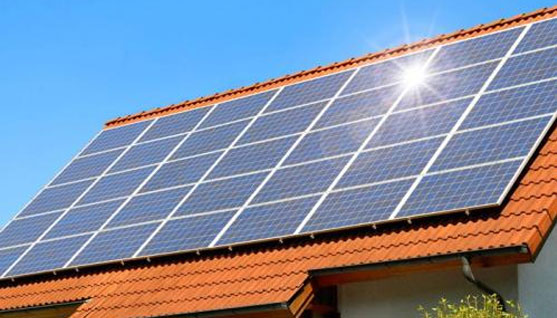 Photoelectric effect is the phenomenon of potential difference between different parts of uneven semiconductor or semiconductor and metal. First, it is a process of converting photons (light waves) into electrons and light energy into electrical energy. Second, there is the voltage formation process.

Polycrystalline silicon is made into silicon wafers to be processed after being cast, broken and sliced. Doped and diffused trace amounts of boron, phosphorus and so on on the silicon wafer

Into a p-n junction. Then, screen printing is used to print the fine silver paste on the silicon wafer to make grid lines. After sintering, back electrodes are made at the same time, and a layer of anti-reflection coating is applied on the surface of the grid lines, so that the cell is made. The cells are arranged in such a way that they form a large circuit board. The assembly is usually surrounded by an aluminum-clad frame, with glass covering the front and electrodes mounted on the back. With battery components and other auxiliary equipment, a power generation system can be formed. In order to convert direct current to alternating current, a current converter needs to be installed. After generating electricity, it can be stored in batteries or put into the public grid. Battery components account for about 50% of the cost of power generation systems, while current converters, installation fees, other auxiliary components and other expenses account for the other 50