How to Detect a PID in a PV Module?

If you are dealing with unexpected and unreasonable power losses in a PV plant, you may encounter PID effects in PV modules.

Potential Induced Degradation (PID) is a phenomenon that occurs over time (months or even years). In the early stages of the plant, it is negligible, but as time passes it becomes more pronounced in the advanced stages, leading to significant power losses. However, identifying the main cause is not always easy.

Where Does PID Occur in PV Modules?

PID is related to the negative potential that each PV module can deal with when working in normal operative conditions. PV modules are connected in series to create a string and the overall string voltage is distributed among all the single PV modules. How this voltage distribution happens depends on the inverter type used.

How to detect a PID in a PV module

Due to the nature of the PID effect, the IV curve test is more appropriate in this case. The PID solar reduces the performance of the PV module due to the reduced shunt resistance of the electrical model. This corresponds to an increase in leakage current, resulting in a reduction in output current (and therefore in total output capacity) and affecting the IV curve. 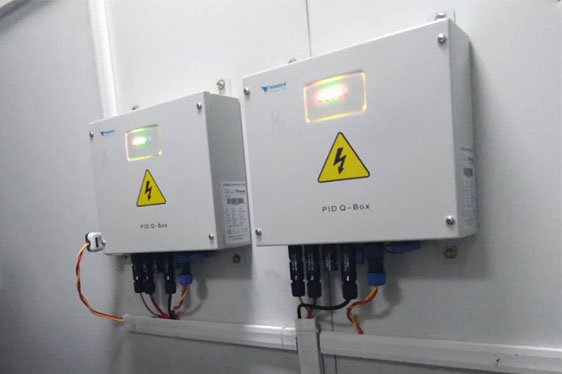 Fortunately, in most cases, the PID effect is reversible. However, if it exists for an extended period of time without the use of problem-solving measures, it will permanently affect the inherent properties of the cell and sealant.

If PID has occurred, it can be mitigated by grounding the negative DC pole on the inverter to avoid negative voltages on the string. This method is valid if the inverter allows this mode of operation and all appropriate design measures are taken in relation to this choice.

PID can also be mitigated by using a so-called "anti-PID box", which is installed between the string and the inverter. The anti-PID box reverses the potential applied by the inverter in order to polarise all PV modules affected by the negative voltage in the opposite way. The effect of these boxes is to avoid keeping the same polarisation in each string for a long period of time, in order to reduce the possibility of PID and to offer each module the possibility of "recovering" from the negative potential suffered.

For new PV plants, it is important to focus on the type of material and design choices for each module before making any purchases.

The design choices that may affect the occurrence of PID are mainly related to the choice of PV modules. For example, choosing a frameless PV module reduces the likelihood of PID because of the small area of the zero potential region compared to a framed module. Only a small part of the fixture size has a ground potential. There will also be other insulating materials between the fixture and the PV module, so possible leakage currents are less likely to occur.

On the other hand, frameless modules are usually double glazed, weigh more and cost more, so they are not always the best choice for all projects. It is often possible to concentrate on the quality of the PV module and its bill of materials before making a purchase. In this sense, the IEC standards provide support for the required quality.

Next What Are the Factors to Consider When Buying a PV System?